Ever since Google released a long list of updates in 2021, everyone noticed fluctuations in their organic traffic. Understanding Google’s algorithm and updates are crucial for businesses to increase traffic. Each year, Google applies thousands of updates to improve the user experience, which all have varying levels of impact. Some of these will not significantly impact your SEO strategy, but others could have a major impact. Despite Google’s frequent updates, it is important to continue creating high-quality content, using relevant keywords, and creating a reputable backlink profile.

What is Google Algorithm?

Google algorithm updates 2021 impacted SEO throughout the year. It constantly improves its algorithm to ensure its users see the most relevant, accurate, and secure pages. However, sometimes these updates boost traffic to certain sites or reduce it to others, causing panic among marketing to adapt to these changes. Some of the notable updates in 2021 are: 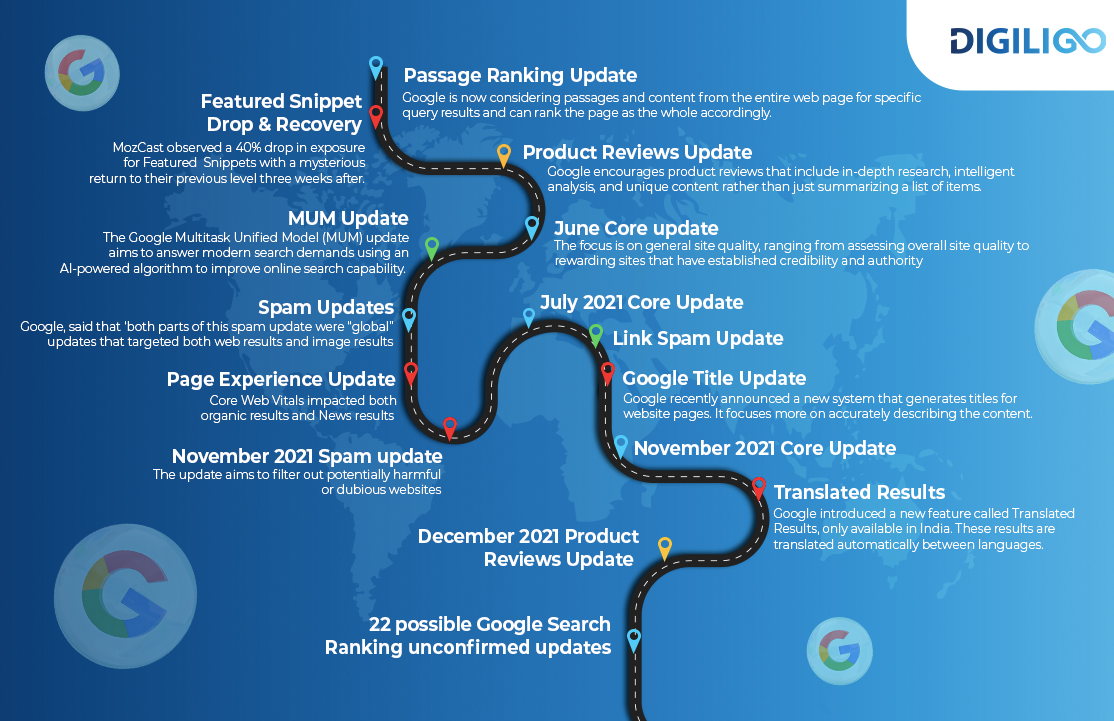 Google is now considering passages and content from the entire web page for specific query results and can rank the page as the whole accordingly. Consequently, certain passages will appear as featured snippets. In this way, users do not have to comb through web pages to find answers to specific questions. The change affected worldwide searches by up to 7%.

About This Result Update

After featured snippets dropped by 40 percent for three weeks, they suddenly disappeared from Google Search, only to appear once again on March 12, but with the same rankings as previously. Google has not explained the absence or return of Featured Snippets, nor has it acknowledged that the change was caused by a faulty algorithm update or a bug.

After years of experimentation, Google announced on March 26 that they have started migrating sites that follow mobile-friendly practices. By July 2021, it will be mandatory for all existing and new sites.

As part of its April 2021 review update, Google encourages product reviews that include in-depth research, intelligent analysis, and unique content rather than just summarizing a list of items. Google discovered that many reviews do not provide information that helps individuals make purchasing decisions following testing, experimenting, and reviewing.

The Google Multitask Unified Model (MUM) update aims to answer modern search demands using an AI-powered algorithm to improve online search capability. It is a natural terminology model that is much more effective than the BERT of October 2019. MUM recognizes information in text and images, and Google plans to extend its functionality to video and audio as well. As it understands 75 languages, it can pool and serve results comprehensively and holistically, answering even complex queries.

There was speculation on how these core updates would affect the SEO community as the rankings fluctuated. The focus is on general site quality, ranging from assessing overall site quality to rewarding sites that have established credibility and authority that Google hasn’t verified yet.

Core Web Vitals also affected organic and news results as part of this update. With this update, pages deliver a quality page performance with fast load times, non-shifting and stability.

As a follow-up to the June Core Update, the July 2021 Core Update was released July 1-12. Our analysis of several data providers found that the core update in July was smaller and less impactful than the one in June. As with all core updates, the update was global and not specific to any region, language, or category of websites.

Google announced their latest effort to combat low-quality content from ranking high with this update on July 26. Through the Link Spam update, link spams are identified and eliminated more broadly across multiple languages. Link spamming sites will see changes in Search as Google the algorithm evaluates their links.

Google recently announced a new system that generates titles for website pages. It focuses more on accurately describing the content. Regardless of the query, the new title system produces better titles that describe what the document is about overall.

As part of Google’s ongoing efforts to enhance search results, a spam upgrade was sent out between November 3 and 11, 2021. They advised webmasters to continue following the Webmaster Guidelines in their announcement. The update aims to filter out potentially harmful or dubious websites. It also seeks to identify and filter out sites with no added value and those using black hat SEO techniques.

The Google Search Central team announced on Twitter on November 17 that a major core upgrade would be available later that day, also known as a broad core update. Site owners were directed to their guidance on what they should know about upgrading their core. The most recent upgrade occurred in August 2019.

Google introduced a new feature called Translated Results, only available in India. These results are translated automatically between languages. Translated results allow users to view results from other languages, enabling publishers to reach a wider audience.

Google’s product reviews update aims to promote content above and beyond the templated information you find on the web. As a result, English-language product reviews will be affected and the process will take about three weeks.

While you should focus on authority, authoritativeness, and trustworthiness (EAT) in SEO, modifications may not strongly impact your results if you follow a thorough and evolved approach. Despite this, you must monitor changes and report on your success as an SEO executive, webmaster, or business owner to fine-tune your plan and adapt. Digiligo offers proven solutions for all your digital marketing needs. Let’s work on your SEO strategy together!