Counterfeiting in India – A brief

Product counterfeiting is a well-known problem, one that has been with us for a very long time. Trademarks go back to ancient times and where there are trademarks counterfeiting soon follows. Recently more attention is being paid to fighting the problem. It would seem the first logical step would be to determine the size of the counterfeit market. But estimating the extent of this illicit trade is a difficult task. First, no direct measurement of counterfeit trade can be undertaken, since by definition this is an illegal activity. Customs seizures are such a small percentage of overall trade that it is impossible to draw conclusions from these statistics. Many organizations, including the US General Accountability Office (2010), have attempted to estimate the size of the counterfeit market and have described the major flaws in every method which tries to put a definite size on it.

It is a global threat that’s curbing revenues of both the Industry and the home Government. The counterfeit trade shifting from relatively innocuous items like shoes and handbags to medicines and food products to integrated circuits in fighter jets to critical parts in automobiles that can carry serious health and safety implications. 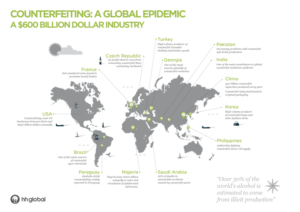 The International Chambers of Commerce (ICC) expects the value of counterfeit goods globally to exceed $1.7 Trillion by 2015 end from the current size of $600 billion (2013 data by HH global,a reputed marekting services company) which is over 2% of the world’s total current economic output.

Rapid advances in technology and liberalization of the Indian economy, has created an ideal market for people trying to misuse existing brand values that have been cultivated and nurtured over a period of time. Counterfeiting is a serious crime!!

The largest tax loss to the government will be from Counterfeit FMCG and Pharmaceutical products, which in-fact are the most dangerous counterfeits available in the Indian market that pose a high threat to consumer’s health. Below are the forecasts for the Total sales loss to the industry and the Total tax loss to the government from these counterfeit sectors; previous data has been taken from ASSOCHAM and FICCI and data has been extrapolated for 2015 forecasts.

It also stated “There are no Bureau of Industrial Standard norms laid out for each product category which could help prevent the mushrooming of counterfeit products” which is quite the reason for counterfeit goods being manufactured and sold openly to customers.

The problem of fake medicines is clearly worsening, although the difficulty of identifying fake drugs makes it impossible to gauge its true extent. Until recently, the World Health Organisation (WHO) suggested that 10-30% of medicines circulating in lower and middle income countries were fake.

There is still no accurate estimate of the global scale of counterfeit medicines. Various reports by other suggest that the size of the global fake drugs industry could run into hundreds of billions of dollars. Deloitte’s Vice President Terry Hisey says “it could be in the range of $50- $200 Billion annually. (Economic Times, 2013)

These are not the only sectors that are losing as a result of counterfeit manufacturers, almost every industry in India are facing problems. For a glimpse, the auto Industry in India is facing counterfeit issues in their au to-spare parts which are causing quite a lot of accidents that are indirectly leading to loss of Brand-trust. It is forecasted that the auto-industry in India can lose upto Rs32, 431 Crore as a result of fake auto-components; while the government can lose upto Rs 9,729 Crore in taxes from these fake auto-components.

Other Industries that are losing out are the Alcobev Industry, Tobacco Industry, Luxury segment and the Movie & Entertainment Industry. All Industries are expected to lose anywhere between Rs 3,000 Crore to a whopping Rs 24,000 Crores and the tax loss to the government range in from anywhere between Rs 1,200 Crores – Rs 9,000 Crores. The reasons are similar and relate perfectly to all the industries. One of the major reasons why counterfeiting is growing in India is the low consumer awareness and the lack of understanding of these counterfeit products. Many customers don’t know the implications and safety issues that arise as a result of using counterfeit products.

Another reason that plays in hand with the awareness is the weak IP protection and Law enforcement in India, which has resulted in fake manufacturers to duplicate other products in the market.

Finally, the biggest concern of all is the currency counterfeiting that’s taking place in India. Fake notes are being pumped into India from neighboring countries to support terror activities which has been quoted in a report on DNA, which was a key issue raised by India at the SAARC meet in Kathmandu. Sources claim almost $2.2 Trillion worth of Currency in India could be fake.

*** Figures are not accurate but are estimates from previous data.